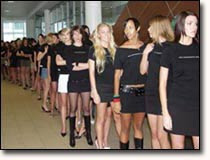 Caveat Emptor: This topic slithers into almost every area of your being. So please remember this is just one reasonable person’s opinion, based on personal experience and lots of talking and reading. What follows has evolved through ten years on both sides of the audition table. But it is NOT Moses and the tablets.

The State of Mind
How to audition? Energy. Regardless of your inner feelings, drop negativity, lethargy, doubt at the door. Walk in with Energy.
Note: Some rather vague terms, such as “energy” are used here — vague because they try to capture inner qualities. For energy, you can substitute the idea of PASSION. PASSION FOR ACTING. PASSION FOR LIFE. Years ago Lust for Life was a popular biography about Van Gogh. Wonderful title. Think of Dylan Thomas and “the force that drives the water through the rocks.” Think of intensity that enthralls. Think of forked lightning. Of comets. Energy.
First, there are numerous books written on auditioning. Go to a theatre bookstore and browse. Most “How To” books help a bit but they eventually dissolve into acting suggestions: “Play to your reader, make strong choices.” Acting 101 stuff. Or they propose some bromide like: “They really want you to succeed.”
Some Things are Beyond Your Control
Let’s clear up here at the start all the things you cannot control in an audition. Right off, know this: Often directors/producers already know whom they want. And the higher up the audition chain, the more true that comment. And if possible, they will always go with a “name,” no matter how obscure the “name,” even if they think you really are better for the role. And they adore Broadway credits no matter if they were 40 years ago or if you merely carried a sword.
True Story: Two years ago, Q was called in via an agent to audition for a major theatre, major casting office, major director. Part of Q’s preparation for the audition was a two-hour coaching session. (Not free!) Q went into the audition room to kill: Internal energy aflame, right appearance, social skills aglow, sides prepared, research done. Entire script studied. Great interview (warm and confident but not smart ass, energetic but not manic, charming but not effusive, antenna alert but not needy). After the interview section, Q read the sides. Had the director, his assistant, the casting director and his assistant in tears (appropriate response to passage). Renowned director grasped both of the Q’s hands: “We will meet again.” The CD whispered: “Never go back to your day job.’”
Next day the coach called Q. Says Coach: “I didn’t want to tell you before the audition, but a friend of mine signed a contract for that role at that theatre two weeks ago.” (Note: Signed Actor had done B’way and major Regionals and films. The signed actor had even worked with that director before.) Advice TO Q: Forget it. Move on. It was an A+ audition. That is the only part you can control.
Realize that casting directors may have other reasons for casting than talent. They may go with someone they have worked with before. Or with someone with better credits. Or with someone who — God forbid — is not better than their star. (Yes, an actor friend was told by a casting director that he was not cast in a small role BECAUSE HE WOULD OUTSHINE THE LEAD.)
Women have not been cast because they were taller than the male lead. Someone wasn’t cast because she had red hair and the lead had red hair. And there are hundreds of other reasons why you didn’t get cast. Just make sure you, yourself, are not the reason for being skipped over. Rejection is rampant and often unfair in this profession.
Learn to Live with Rejection
So, remember, quite often they do not want you to succeed. They are the enemy. Your future at that moment is in their control. And you’d better go in to knock ‘em off their chairs, to make them gasp, to make it difficult for them to continue in their “safe choice” rut. Nothing less will work. And even that doesn’t work all the time. Frankly, it is them vs. us. If they are lovely, complimentary, gushy, don’t believe them. If icicles hang from their tongues, don’t believe them.
Some actors deal with rejection by developing thick skin and steel armor. However, this can be a major danger and gamble if you opt for thick skin and steel armor because whatever prevents hurt from getting in to your feelings simultaneously prevents your inner feelings from getting out. And that spells the end of acting. Period. A large part of being an actor is the ability to feel. Moral: Live with the pain of rejection. It will pass.

The Most Requirements To Be A Model

it helped me with knowledge so i really believe you will do much better in the future i appreciate everything you have added to my knowledge base. thanks.